Ed Alexander is Gwich’yaa Gwich’in from Fort Yukon, Alaska. He is passionate about his language and ensuring that the next generation has access to quality educational opportunities rooted in their language and culture. He advances this goal, in the classroom and by working to provide Gwich’in language resources to the communities, which he has done in his capacity as a teacher, principal, and language coordinator; currently employed as the Yukon Flats Centre Coordinator at the University of Alaska (Fairbanks) and to co-chairman of Gwich’in Council International.

Sharla Greenland is the youngest daughter of Freddie and Bella Greenland. She is Ehditaat Gwich'in on her father's side and Vuntut Gwich'in on her mother's. Sharla was raised in Aklavik NT, and enjoyed most of her childhood summers in Old Crow YT. She spent much of her early years on her family trap-line in the Mackenzie Delta, as well as on family hunting trips up the Porcupine River, learning the Gwich'in lifestyle from her parents, grandparents and the elders in her communities.

Sharla is passionate about youth wellness and is an advocate for reconnecting and strengthening cultural practices as the foundation of community health and identity. She completed a Masters of Education from Acadia University and served within the education field for 12 years. Currently, she is the Chief Operating Officer of Gwich’in Tribal Council and lives in Inuvik NT with her husband Pat and their dog Jake.

Sam Alexander is a board member at Gwich’in Council International. Sam grew up in Fort Yukon, Alaska where his father was the traditional chief of the Gwichyaa Gwich’in Tribe of Northern Alaska. He spent much of his childhood exploring the Yukon Flats and the Northeastern Brooks Range, living the traditional Gwich’in lifestyle as was taught to him by the elders of his tribe.

Sam graduated from the United States Military Academy and spent ten years as a US Army officer, leaving as a Major in the US Army Special Forces (Green Berets). Following his time in the Army, Sam graduated from the Tuck School of Business at Dartmouth, he became the co-founder and CEO of Latitude six-six, where he takes people on incredible expeditions to showcase his home. In addition to guiding, Sam is a full time faculty member at the University of Alaska Fairbanks in the Homeland Security and Emergency Management Program.

Crystal Gail Fraser is Gwichyà Gwich’in and originally from Inuvik and Dachan Choo Gę̀hnjik in the Northwest Territories. Her PhD research focused on the history of student experiences at Indian Residential Schools in the Inuvik Region between 1959 and 1996. Crystal’s work makes a strong contribution to how scholars engage with Indigenous research methodologies and theoretical concepts, our understanding of Indigenous histories during the second half of the twentieth century, and how northern Canada was unique in relation to the rest of the settler nation. Dr. Crystal Fraser was awarded the 2020 John Bullen Prize by the Canadian Historical Association for her thesis, titled T’aih k’ìighe’ tth’aih zhit dìidìch’ùh or By Strength We Are Still Here. The prize honours the outstanding PhD thesis on a historical topic submitted in a Canadian university.

Erin Linklater is of Vuntut Gwich’in, Tetlit Gwich’in and settler descent and is a citizen of the Vuntut Gwitchin First Nation. She was born and raised in Whitehorse, Yukon and has spent much of the last decade living in and visiting Old Crow. Erin identifies strongly with the Gwich’in land, people, culture and way of life. As a GCI board member, she endeavours to bring the strong voices of Gwich’in people across the Gwich’in Nation to the international arena.

Erin completed a Bachelor of Arts in Political Science at McGill University and a Juris Doctor at the University of Victoria Faculty of Law. She is a member of the Yukon bar association, and is currently based in Whitehorse. She is passionate about the revitalization of Indigenous law and strengthening Indigenous governance, decision-making, and stewardship of lands and resources.

Evon Peter is Neetsaii Gwich’in and Koyukon from Vashrąįį K'ǫǫ (Arctic Village), Alaska. He is an advocate of Indigenous knowledges, languages, and rights, especially as they relate to the health and well-being of communities. Evon is a senior research scientist at the Center for Alaska Native Health Research at the University of Alaska Fairbanks (UAF). He serves on the boards for the Gwich’in Council International and the University of the Arctic (UArctic). He has previously served as the tribal chief for Vashrąįį K'ǫǫ and as vice chancellor for rural, community and Native education at UAF. His personal work has focused on incorporating Indigenous knowledge and practices into healing, leadership development, and Alaska Native language programs. He holds a baccalaureate degree in Alaska Native studies and a masters degree in rural development.

Kris Statnyk (he/him) is a citizen of the Vuntut Gwitchin First Nation.  Kris is the son of Marie Statnyk (Bruce) and grandson of the late Dr. Reverend Ellen Bruce, Robert Bruce Sr. and Agnes Mills of Old Crow, Yukon.

Kris is an Indigenous rights lawyer who works with Indigenous communities in support of their rights to self-determination. Prior to becoming a lawyer, he completed a Bachelor of Arts in Political Science at University of Alberta and a Juris Doctor at the University of Victoria, Faculty of Law.  Kris currently lives within the Gitxsan Nation territory in New Hazelton, BC, together with his wife and son who are Gitxsan.

Kris is inspired by the history of his ancestors and the Gwich’in Nation, and is honoured to continue their legacy of working together ‘in a good way’ for the survival, dignity and well-being of all our relations.

We are grateful to all those who have volunteered time and expertise as past Board Members and volunteers. During periods of transition, Board Members may mentor others or retain portfolios to ensure continuity. 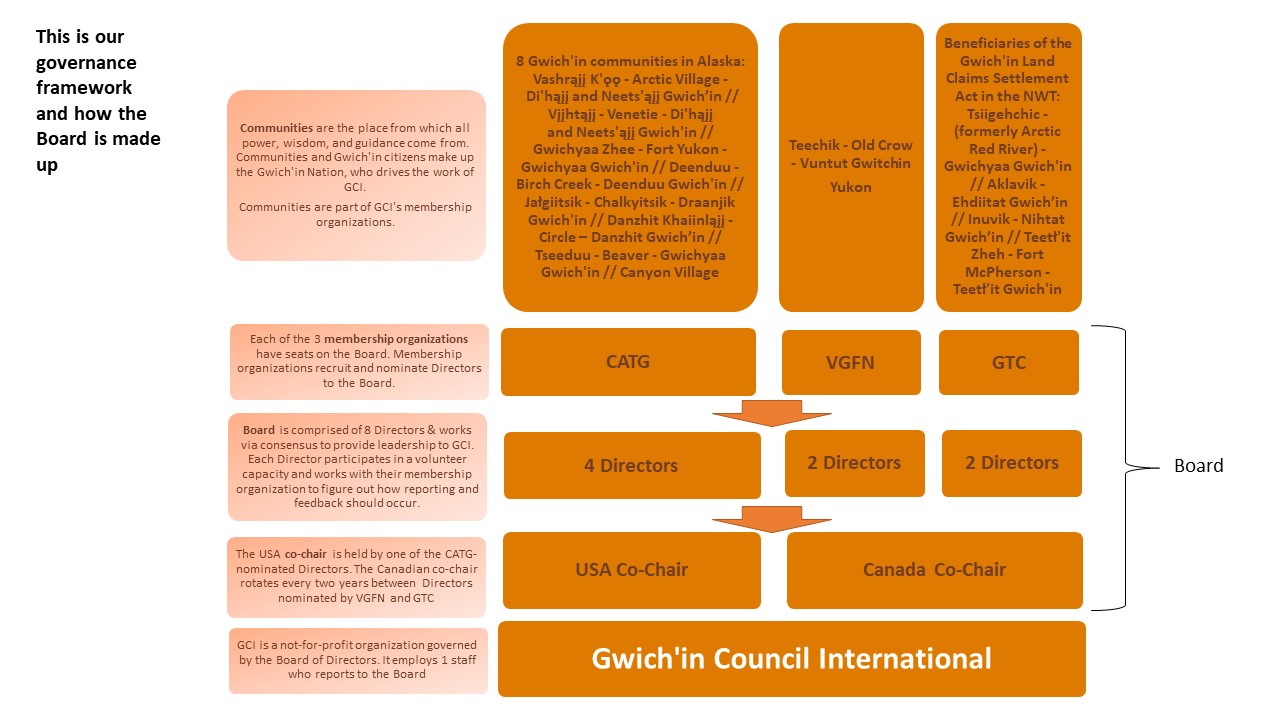